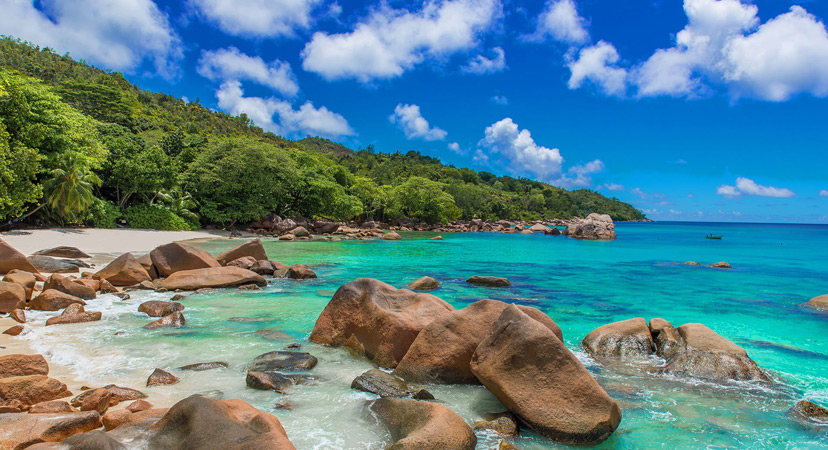 Seychelles ( (listen); French: [sɛʃɛl] or [seʃɛl]), officially the Republic of Seychelles (French: République des Seychelles; Creole: La Repiblik Sesel), is an archipelagic island country in the Indian Ocean at the eastern edge of the Somali Sea. It consists of 115 islands. Its capital and largest city, Victoria, is 1,500 kilometres (932 mi) east of mainland Africa. Other nearby island countries and territories include the Comoros, Madagascar, Mauritius, and the French overseas regions of Mayotte and Réunion to the south; and Maldives and the Chagos Archipelago (administered by the United Kingdom as the British Indian Ocean Territory) to the east. It is the least populous sovereign African country, with an estimated 2020 population of 98,462.

Seychelles was uninhabited prior to being encountered by Europeans in the 16th century. It faced competing French and British interests until coming under full British control in the late 18th century. Since proclaiming independence from the United Kingdom in 1976, it has developed from a largely agricultural society to a market-based diversified economy, characterized by rapidly rising service, public sector, and tourism activities. From 1976 to 2015, nominal GDP grew nearly 700%, and purchasing power parity nearly 1600%. Since the late 2010s, the government has taken steps to encourage foreign investment.

Today, Seychelles boasts the highest nominal per capita GDP of any African nation. It has the second-highest Human Development Index of any African country after Mauritius. It is one of only two African countries classified as a high-income economy by the World Bank (the other being Mauritius).

Seychellois culture and society is an eclectic mix of French, British, and African influences, with more recent infusions of Chinese and Indian elements. The country is a member of the United Nations, the African Union, the Southern African Development Community, and the Commonwealth of Nations.