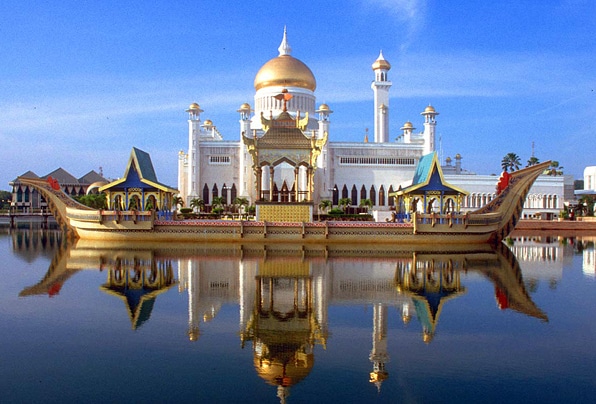 Brunei ( (listen) broo-NYE; Malay: [brunaɪ] (listen)), officially the Nation of Brunei, the Abode of Peace (Malay: Negara Brunei Darussalam, Jawi: نڬارا بروني دارالسلام‎) and also commonly known as Brunei Darussalam, is a country located on the north coast of the island of Borneo in Southeast Asia. Apart from its South China Sea coast, it is completely surrounded by the Malaysian state of Sarawak. It is separated into two parts by the Sarawak district of Limbang. Brunei is the only sovereign state entirely on Borneo; the remainder of the island is divided between Malaysia and Indonesia. As of 2020, its population was 460,345, of whom about 100,000 live in the capital and largest city, Bandar Seri Begawan. The government is an absolute monarchy ruled by its Sultan, entitled the Yang di-Pertuan, and implements a combination of English common law and sharia law, as well as general Islamic practices.

At the peak of the Bruneian Empire, Sultan Bolkiah (reigned 1485–1528) is alleged to have had control over most regions of Borneo, including modern-day Sarawak and Sabah, as well as the Sulu Archipelago off the northeast tip of Borneo, and the islands off the northwest tip of Borneo. Claims also state that they had control over Seludong (or the Kingdom of Maynila, where the modern-day Philippine capital Manila now stands) but Southeast Asian scholars believe this refers to a settlement Mount Selurong in Indonesia. The maritime state of Brunei was visited by Spain's Magellan Expedition in 1521 and fought against Spain in the 1578 Castilian War.

During the 19th century, the Bruneian Empire began to decline. The Sultanate ceded Sarawak (Kuching) to James Brooke and installed him as the White Rajah, and it ceded Sabah to the British North Borneo Chartered Company. In 1888, Brunei became a British protectorate and was assigned a British resident as colonial manager in 1906. After the Japanese occupation during World War II, in 1959 a new constitution was written. In 1962, a small armed rebellion against the monarchy was ended with the help of the British.

Brunei gained its independence from the United Kingdom on 1 January 1984. Economic growth during the 1990s and 2000s, with the GDP increasing 56% from 1999 to 2008, transformed Brunei into an industrialised country. It has developed wealth from extensive petroleum and natural gas fields. Brunei has the second-highest Human Development Index among the Southeast Asian nations, after Singapore, and is classified as a developed country. According to the International Monetary Fund (IMF), Brunei is ranked fifth in the world by gross domestic product per capita at purchasing power parity. The IMF estimated in 2011 that Brunei was one of two countries (the other being Libya) with a public debt at 0% of the national GDP.