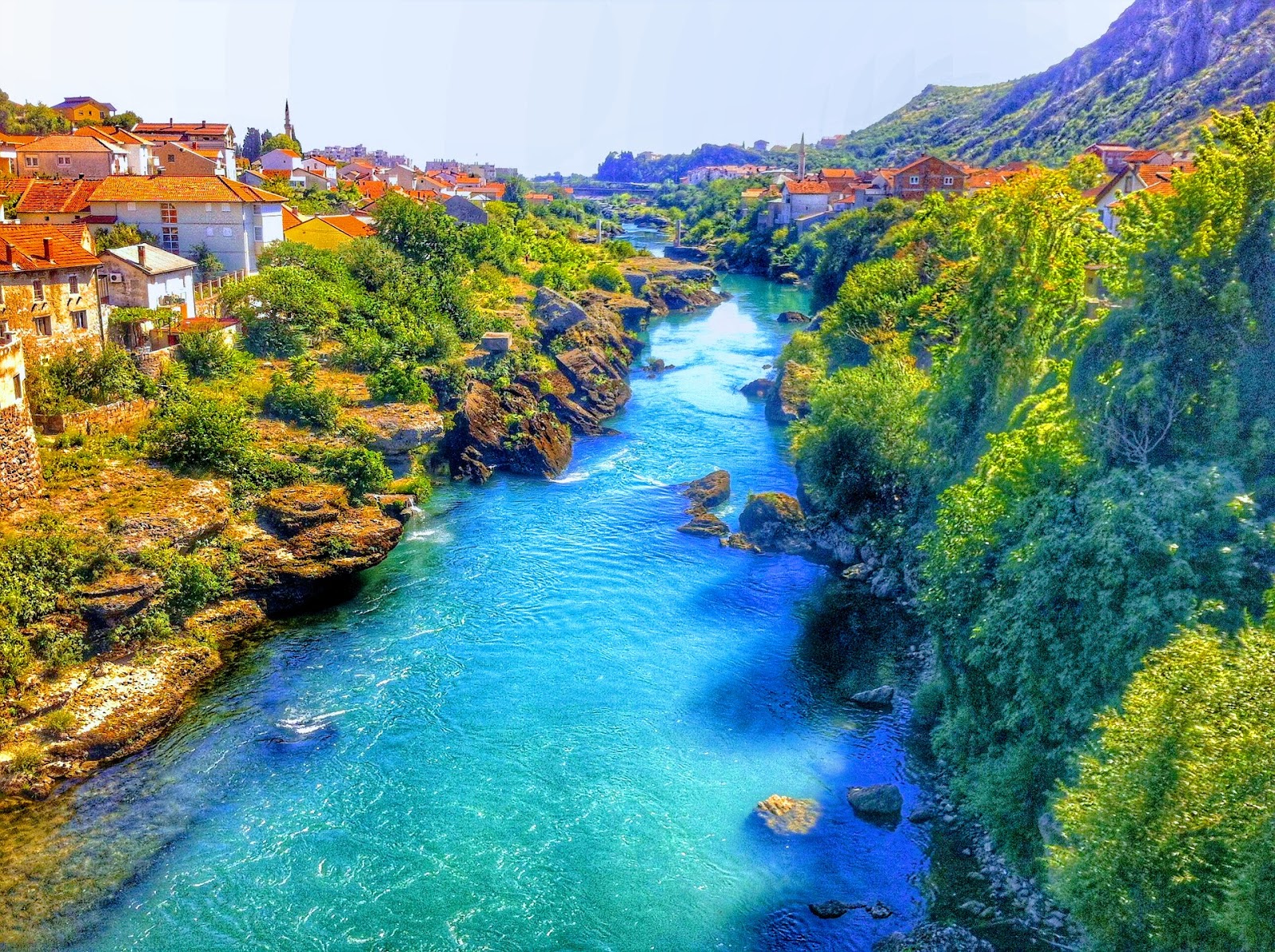 Bosnia and Herzegovina (Serbo-Croatian: Bosna i Hercegovina / Боснa и Херцеговина, pronounced [bôsna i xěrtseɡoʋina]), abbreviated BiH or B&H, sometimes called Bosnia–Herzegovina and often known informally as Bosnia, is a country in South and Southeast Europe, located within the Balkans. Sarajevo is the capital and largest city.

Bosnia and Herzegovina is bordered by Serbia to the east, Montenegro to the southeast, and Croatia to the north and southwest. It is not entirely landlocked; to the south it has a narrow coast on the Adriatic Sea, which is about 20 kilometres (12 miles) long and surrounds the town of Neum. The inland Bosnia region has a moderate continental climate, with hot summers and cold, snowy winters. In the central and eastern interior of the country the geography is mountainous, in the northwest moderately hilly, and in the northeast predominantly flatland. The smaller southern region, Herzegovina, has a Mediterranean climate and mostly mountainous topography.

Bosnia and Herzegovina has been settled since at least the Upper Paleolithic but permanent human settlement traces back to the Neolithic age, during which time it was inhabited by cultures such as Butmir, Kakanj, and Vučedol. After the arrival of the first Indo-Europeans, it was populated by several Illyrian and Celtic civilizations. Culturally, politically, and socially, the country has a rich but complex history, having been first settled by the South Slavic peoples that populate the area today from the 6th through to the 9th centuries. In the 12th century the Banate of Bosnia was established, which evolved into the Kingdom of Bosnia in the 14th century, after which it was annexed into the Ottoman Empire, under whose rule it remained from the mid-15th to the late 19th centuries. The Ottomans brought Islam to the region, and altered much of the cultural and social outlook of the country. This was followed by annexation into the Austro-Hungarian Monarchy, which lasted up until World War I. In the interwar period, Bosnia and Herzegovina was part of the Kingdom of Yugoslavia and after World War II, it was granted full republic status in the newly formed Socialist Federal Republic of Yugoslavia. Following the breakup of Yugoslavia, the republic proclaimed independence in 1992, which was followed by the Bosnian War, lasting until late 1995 and culminating with the Dayton Agreement.

The country is home to three main ethnic groups or, officially, constituent peoples, as specified in the constitution. Bosniaks are the largest group of the three, with Serbs second and Croats third. A native of Bosnia and Herzegovina, regardless of ethnicity, is usually identified in English as a Bosnian. Minorities, defined under the constitutional nomenclature "Others", include Jews, Roma, Ukrainians and Turks. Bosnia and Herzegovina has a bicameral legislature and a three-member Presidency composed of a member of each major ethnic group. However, the central government's power is highly limited, as the country is largely decentralized and comprises two autonomous entities: the Federation of Bosnia and Herzegovina and Republika Srpska, with a third unit, the Brčko District, governed under local government. The Federation of Bosnia and Herzegovina further more consists of 10 cantons.

Bosnia and Herzegovina is a developing country and ranks 73rd in human development. Its economy is dominated by the industry and agriculture sectors, followed by the tourism and service sectors, the former of which has seen a significant rise in recent years. The country has a social security and universal healthcare system, primary- and secondary-level education is tuition-free. It is a member of the UN, Organization for Security and Co-operation in Europe, Council of Europe, PfP, Central European Free Trade Agreement and a founding member of the Union for the Mediterranean upon its establishment in July 2008. The country is an applicant for membership to the European Union and has been a candidate for NATO membership since April 2010, when it received a Membership Action Plan.